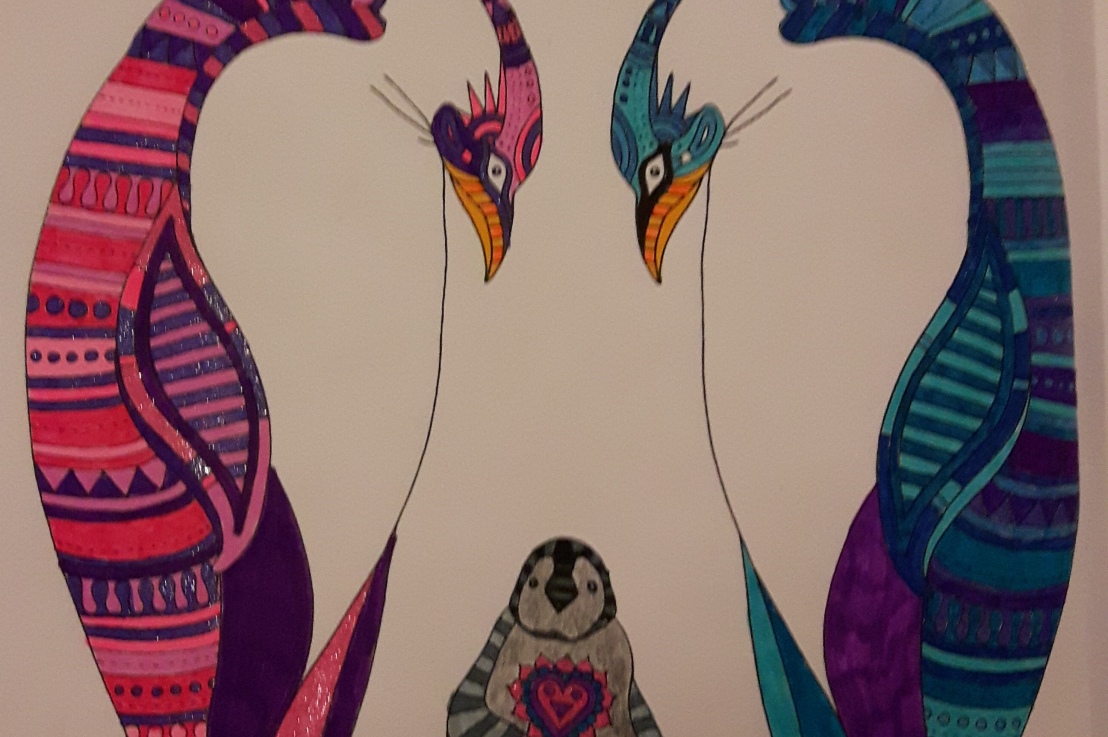 I’ve posted before about enjoying colouring as therapy. I’ve now built up quite a collection of “colouring books for grown-ups”. Here are some crazy penguins I did today. This book has smaller pictures than I usually do but it is great to take with you if you’re on the move or for a quick distraction. I find it works better than reading to combat anxiety whilst, for example, waiting for hospital appointments. My good friend R. gave me that idea.

If I’m waiting for someone or something, my anxiety increases ridiculously. I’m never quite sure why. I’ve only just started to become aware of it. I feel the physical symptoms of the emotion before the mental ones – becoming hot and sweaty, or alternatively cold; shaking; finding my breathing tight and constrained; being restless. I’ve identified before that uncertainty over times and meetings with people is very stressful for me. Perhaps part of the reason why is that since childhood, if someone is running late I’ve always imagined something awful has happened to them, like a road accident. I think that stemmed from some of my mother’s threats when I was a young child, usually made when my father was at work and she was at home with me, that if my father ever found out what I was doing to her he would be so upset that he would have a car accident or a heart attack – then she’d phone him and tell him what I’d been doing to her (though it later turned out a lot of the time she was only pretending to phone him)  – so if he was ever late I’d become frightened the threatened accident had occurred. But I think a good part of it is just my inability to cope with uncertainty.

Anyhow, colouring calms the anxiety more effectively than reading, or counting backwards, or counting objects or colours and so on. Perhaps because you are physically engaged in doing something and have to make a certain amount of decisions about the colours to use and so on. And it has the added bonus that you can turn your picture into something pretty in the end – frame larger designs, or make cards out of them.

I often pass the evenings this way too, when I’m too tired to do much else.